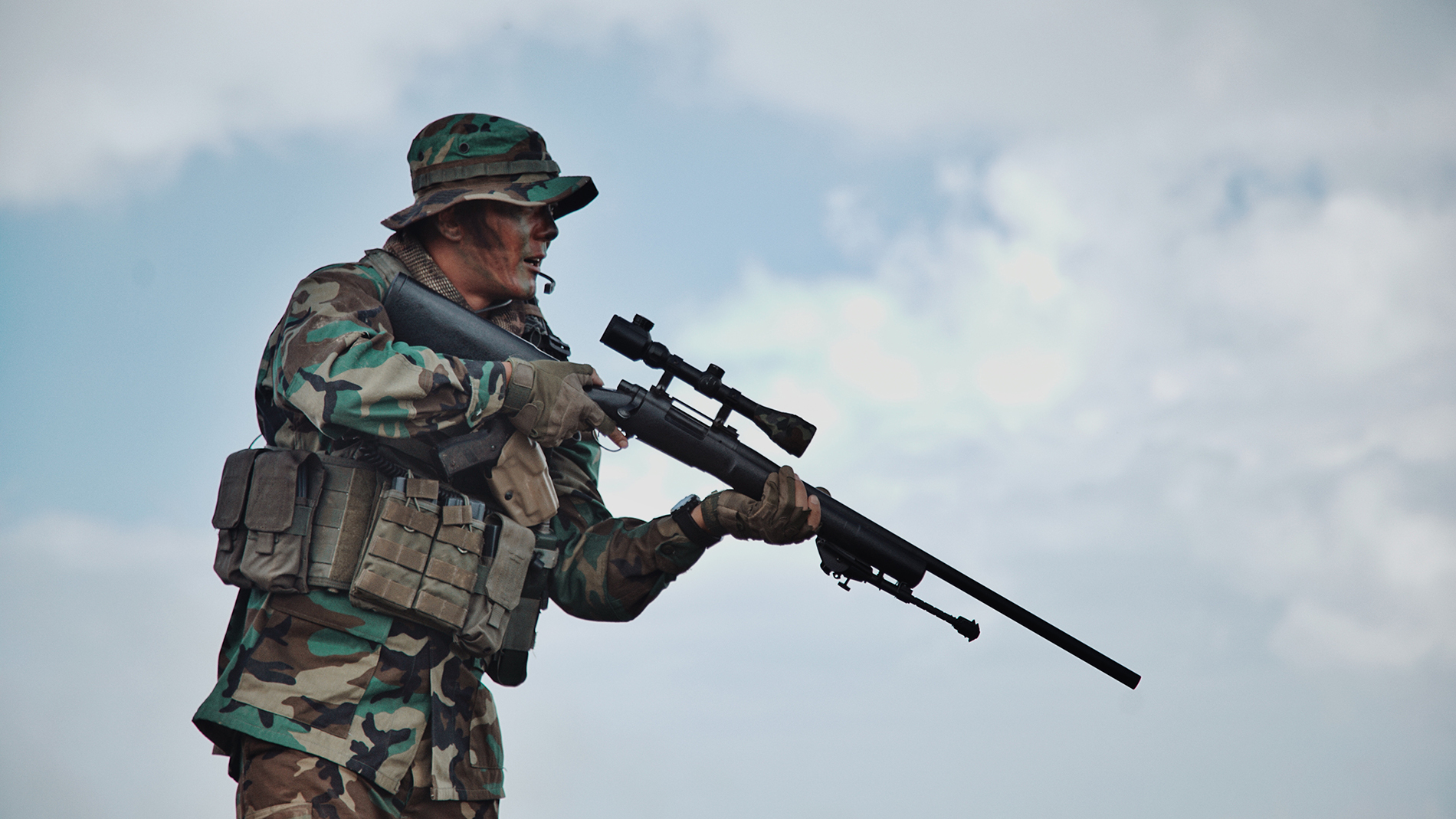 Modern military uniforms are the result of centuries of refinement, the apex of function and efficiency – and it all started with a blue coat and white overalls. Changes to the United States military uniform have been gradual but the goal has always been the same: keep our boys safe, keep them stocked, and keep America strong. The influences are numerous, even down to the materials, but the results have proven iconic. So let us take you through eras of American history and see the evolution of our modern military uniforms from humble beginnings.

The American Revolution to the War of 1812

Considering the circumstances around the American Revolution, it’s no surprise that the Continental Army uniforms were nearly identical to those of the British. The main distinguishing factor of the standardized version of the uniform was the blue coat (as opposed to the dreaded red coat of the enemy) and white overalls. Prior to Washington’s 1779 order for uniformity in attire, early revolutionary clothing varied tremendously – though long, brown coats were more common. Material shortages throughout the war made uniform consistency difficult, and to distinguish ranks insignia were added.

The War of 1812 prompted an update to the standard Continental Army uniform. Front Facing Buttons and a switch to blue wool coats helped shape the look for many years to come. Because of a shortage of blue wool, some state militias used gray instead.  Belgian inspired shako hats would replace revolutionary hats and provide a more elegant look. The regal nature of these uniforms is a far cry from the more functional look of modern military uniforms but things would soon head in that direction.

The westward expansion made Dragoon Regiments (mounted soldiers) extremely valuable and prompted a new set of regulations to distinguish these units from others. Shoulder wings were introduced as a way of determining status, and the uniform coatee changed slightly, providing new pattern buttons that varied depending on rank. The European influences are definitely still noticeable in these early uniforms but the United States would gradually start developing its own style, accelerated by a major split in the upcoming years.

In 1850 these regulations were changed again to provide even more distinction between rank and branch. A frock coat replaced the coatee and accent colors varied by branch: Blue for infantry, red for artillery, orange for dragoons, green for mounted rifles, and black for staff. Forage folding caps eventually replaced the shako hat, a much more functional choice. These changes remained throughout the Civil War. Confederate soldiers differentiated themselves by opting for a gray focused color scheme in 1862, though early on it was not uncommon to see a more yellow-brown color scheme on many of the soldiers. The period after the Civil War saw a lack of uniformity yet again, but another conflict would brew and inch The United States a little bit closer to what would become the look of modern military uniforms.

In 1902 a board was assembled and took a long, hard look at the state of U.S. military uniforms and went on to make drastic changes. It was during this time that the position of Chief of Staff was created and the National Guard was established. Reorganization and innovation were the top priorities. Blue was eliminated as the primary color for servicemen and was replaced by olive drab and khaki. New insignia and buttons were introduced, and cotton replaced wool as the material of choice. These changes were controversial as such a big change was considered an unnecessary expenditure but a compromise was made: older service uniforms were still issued and allowed to be used until the stock was depleted.

It is in this early part of the 20th century, however, that the army began to focus on efficiency and reliability, something that is a staple of modern military uniforms. Khaki introduced in the Cuban invasion of 1898 and became dominant until the next major conflict. World War I saw the addition of the Brodie Helmet (a staple of the British), spiritual puttees around the legs, and a move from toward the olive drab color (Khaki was still worn in the summer).

The Brodie helmet was, however, short-lived as during World War II the M1 took over. The M1 was made from a single piece of Hadfield Manganese steel and had a similar suspension system to football helmets of the time. The ultimate goal was protection and World War II actually saw the additions of many new specialized coats for different branches and units (Windbreakers, parachute jumper coats, cold weather flying jackets). It is at this point that military service uniforms begin to really take shape, and the latter half of the 20th Century would give the military the opportunity to implement some of its most desired changes.

Keeping in line with the philosophy of providing function and comfort, olive green shade 107 cotton utility uniforms replaced the World War II uniform in 1952. Trouser and jacket alterations were not far behind and it is at this point that the military outfits of the time start to really resemble their modern counterparts. As a result of peace negotiations with North Korea during the Korean War, “U.S. ARMY” was required to be sewn on all uniforms.

The Vietnam War introduced something that would become a true staple of the U.S. Army and heavily influence modern military uniforms: Camouflage. These patterns were designated to specialized units (reconnaissance patrol members, for example) and helped significantly with jungle warfare. The enemy South Vietnamese forces actually used a “tigerstripe” variation of the camouflaged uniform; this pattern was adopted by some U.S. forces as well. It would take until 1981 for camouflaged uniforms to be the standard with the woodland camouflage battle dress (BDU). Different variations in camouflage were introduced over the next few years as a result of research and conflicts; this is most noticeable during Desert Storm as camouflage had to be adapted to the desert terrain.

The influx of camouflage into the various military forces actually caused some contention between branches. The Marines initially developed a digital camouflage design and were unwilling to share it (to the point where the pattern was interwoven with the outfit to deter copying). The Army made a point to invest millions into developing a custom version of digital camouflage, which caused some contention between branches. The result of this is the Army Combat Uniform of 2004 and is the general basis for modern military uniforms.

Over the decades, the accouterments have changed, the helmets became more functional and the general design much more efficient. With this level of refinement, the U.S. Military has developed the ultimate service uniform and continues to find ways to improve upon it. Things have come a long way since the battle for our independence, and our attire has reflected our understanding of the world and what it takes to defend it. We didn’t go through all of the variations of uniforms, but trust in the knowledge that the intention has always been the same: Keep our boys safe, keep them stocked, and keep America strong.

Feeling the desire to spruce yourself up with some military clothing? Come by The Surplus Store where we have all sorts of things for you to make part of your wardrobe. Follow us on Facebook and Instagram for updates and more!